To the Coral Peony at Mount Hillel

For years, the route to the Coral Peony ( Admonit in Hebrew) was known only to very few nature addicts and even now if you ask them, they will answer: "It's complicated". So now, it is not!!! The WAZE app came to our aid. Tap Mount Hillel and set off.

As a backup, take with you the trail marking map # 2, plus there are signs pointing to the location from Beit Jann to direct the traffic. 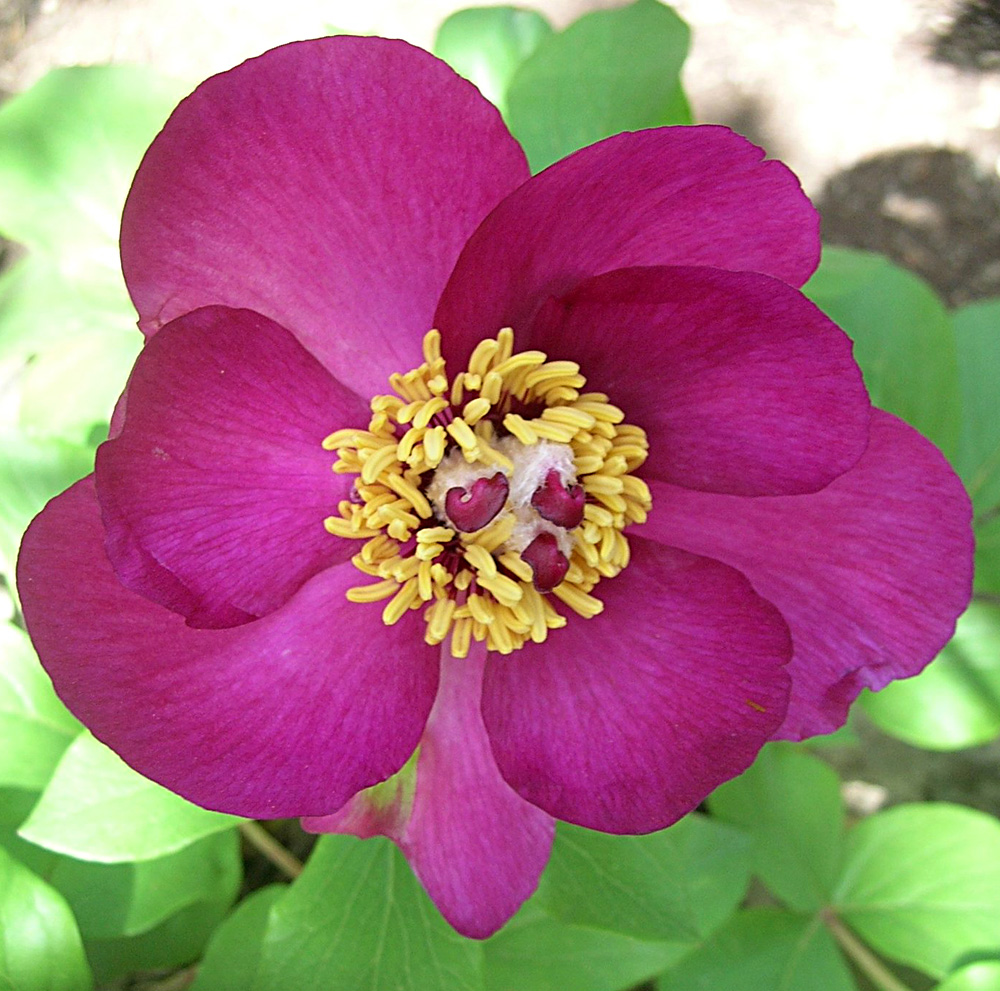 The Coral Peony is a beautiful and exotic flower, one of rarest in the country, the subject of mass pilgrimage during its flowering season. Its diameter is about 10 cm, and Mount Hillel is the limit of its southern worldwide distribution.

Head towards the Druze village Beit Jan using the Waze App; as you exit the village, there are prominent signposts at all intersections, until we reach a parking lot which is at the junction of the blue and green dirt roads. (It is advisable to use trail marking map #2).

You can park in the parking lot and get off on a pleasant walk on the marked green trail, about 1.5 km on a dirt road leads us to the entrance to a black-marked path that goes up to Mount Hillel.

The trail rises quite steep for about 1.5 Km to the top of the mountain in a grove with oak trees with "earrings" and reddish Eastern Strawberry trees, a few Three-Lobed Sage bushes, and Phlomis viscosa bushes that are not blooming yet. The red show comes from the Pistacia palaestina trees that bloom in flaming red. Many butterflies fly around the flowers

Don’t rush and do not forget to stock up on water and hats.

When you are at the top of the mountain, you will see communication antennas on your right. Continue on the black path, and you will already start seeing blooming Peony flowers. Some of them in full bloom, and others will begin soon.... Wow!! So exciting to explore and photograph this beautiful flower.

The Peony bushes are spread apart from each other as their nobility dictates. They bloom in between the Eastern Strawberry trees trees that also bloom during this season.

The blossom continues as the black trail descends on the other side of the mountain towards the blue circular path below. The Peony blooms on the northern slope of Mount Hillel, about 200 meters along the side of the trail, and they are straightforward to spot.

Although we came here for the Peony, we also enjoyed other flowers that bloom here, some of which are rare: Observed and photographed:
A few species of Orchids, yellow bushes of Spiny Broom, that perfumes the area, Jerusalem Sage, Soft-Hairy Rockrose, Sage-Leaved Rockrose and more.

Those who arrive in the late afternoon will enjoy the abundance of Barbary Nut  blossom.

Along the path, there are information boards with explanations about flowers, local legends, and the Druze community.

After descending the black path, you reach a blue dirt road, which is suitable for traveling also by car. Turn left and walk about 2 km to the parking and the car (Circular route). The way passes through orchards and plantations of residents of Beit Jann, some of which are planted on beautiful terraces, this season the cherry, apple and quince trees are blooming.

Another option to make this trip:
Drive with your car on the Blue dirt road until the black trail. Park there, and walk out and back on the black trial to see the flowers.

More information on the Peony by the late Mike Livne:
A branched, bald perennial herbaceous plant, 40 cm in height, sometimes twice as much as that. The leaf is large, rich, and dark green, and is deeply cleft to 3 lobes, each of which is deeply cleft again into 3 broad lobes. Maybe that's what gave him his Arabic name, which means the Bear's palm.

The leaves emerge from the ground in the winter when they roll lengthwise like a dagger, with a reddish color. The roots of the plant are deep, and they are thickened into tubers.

The Peony is a protected plant, and it deserves protection not only because of its beauty but mainly because of its extinction, with a limited population, and exposed to human dangers. The scientific name is derived from the name of Peyon, the Greek doctor of the gods in Greek mythology, who, with the help of this plant, healed the wounded of the Trojan War. of Peyon seeds sown in wine have been known to cure nightmares, evil spirits, evil eye, convulsions, nervous disorders, moonwalking, headache, and liver disorders.

The of Peony blooms in late spring, usually during April, sometimes in late March and the exact date of its bloom varies from year to year. The flower is large, its diameter up to 10 c"m, its shape as a bowl, it's color pink to burgundy. The flower has 3 to 5 hairy cup leaves and 5 to 8 petals.
The pollens are multiple, also contributing to the splendor and royalty of the flower.

The trip is recommended all year round