To the blossoming of Lupines in Tel Sokoh (Turmus Hill)

To Tel Sokoh Now!!! (One of the most popular spot for wildflower lovers in March). Come here for the fantastic Lupines blossom and also the history of Sokoh ruins, which are still scattered around. The ancient settlement had strategic importance.
Many battles took place there over the years, and different occupiers ruled the area.

The accepted opinion is that this is part of the four districts of the kingdom of Hezekiah, which hoarded here food as part of the preparation for a possible attack. 13 stamps with the writing “king” were found around the hill.

Bible mentions:
Sokoh is mentioned during Joshua’s occupation of the land of Israel. Joshua 15:35 “Jarmuth, Adullam, Sokoh, Azekah” During the battle of David and Goliath, the Philistines gathered their forces on this hill.
1
(Samuel 17:1) “Now the Philistines gathered their forces for war and assembled at Sokoh in Judah. They pitched camp at Ephes Dammim, between Sokoh and Azekah” During King David’s period, the settlement is mentioned as one of the locations occupied by the Philistines.
2
(Chronicles 28:18n) ”While the Philistines had raided towns in the foothills and in the Negev of Judah. They captured and occupied Beth Shemesh, Aijalon and Gederoth, as well as Soko, Timnah and Gimzo, with their surrounding villages.”

The most touching mention is related to the battle of David and Goliath. On this hill, the philistines gathered their forces in preparation for the battle. (Samuel 17:1-3 ) “Now the Philistines gathered their forces for war and assembled at Sokoh in Judah. They pitched camp at Ephes Dammim, between Sokoh and Azekah. Saul and the Israelites assembled and camped in the Valley of Elah and drew up their battle line to meet the Philistines. The Philistines occupied one hill and the Israelites another, with the valley between them.”

The Hike:
Tel Sokoh is a hill in the valley of the Elah that rises to a height of about 350 meters above sea level. The site was an ancient agricultural settlement, located opposite Tel Azkah. The locals nicknamed the spot “Lupine Hill”. Naming it after the thousands of  Blue Lupines that paint its slopes in blue but do not bloom on any of the surrounding hills. This is probably because the Lupines “prefer” it’s soil that is rich in Nitrogen. 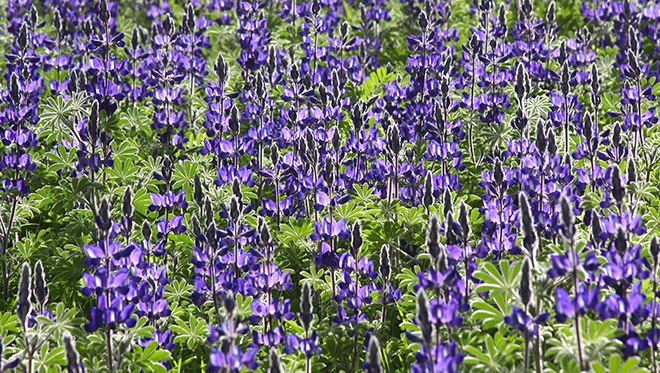 The trail that climbs to the summit is marked with Blue markers and INT (Israel National trail) markers. The path is parallel to the road and heading southeast.
As we park the car, we can spot a few interesting plants (If they had not been overrun by vehicles). Mediterranean Stinkbush Along the trail, but still before we start climbing, we can spot the rare Leontice leontopetalum ( Lion's foot) flowers.

Climb for about 300 meters, with a moderate to a steep rise. Along the way, you pass a sizeable Pistacia palaestina tree and reach the summit of the “Lupines Hill” (In Hebrew Turmus Hill).

The name comes from the masses of Lupine flowers that bloom here in blue color, creating a colorful festival along with the pink of the Silene aegyptiaca. Besides, many additional flowers dot the area. Among them are the Barbary Nut, Crown Anemone, Allium neapolitanum ,  Great Hedge-nettle ,  Common Asphodel . The  Venus' Comb creates the white spots, while the yellow carpets are created by the White Mustard Here we will walk carefully because the place is scattered with ancient stones and unmarked pits.

Rest, take a breath, drink water, and take in the stunning views of the hills to the west and north.
In the west across the road, in perfect timing together with the lupines, all the plantations of Kibbutz "Netiv Halamed He" are also blooming. Almonds, apricots and who knows what else, blossom with incredible pink and white colors on a vast area, with the kibbutz’s oxidation pool in the center, like a blue eye.

To the west, we will see Tel Azkah, where King David camped before his meeting with Goliath. In the northwest, Kibbutz Netiv Halmed he named after the “Lamed He Platoon”. A group of 35 Palmach soldiers who fell here in a battle on 15/1/1948 while trying to reach the Gush Ezion settlements that were under siege. And in the east, we will see a “farm” of satellite dishes.

A walk further on the trail will lead us to the peak of the hill, on the way we will see the remains of warehouses, agricultural facilities, winepresses, cisterns, and chiseled stones. All these indicate that the settlement was probably a farm. If we continue on for another 200 meters, we will reach a ravine, to the right (west) in which is a path that descends to the dirt road at the end of which we parked our car.

At this point, you can walk around the tel and find your ideal spot to take a photo. The blue-marked path continues east toward the other side of the hill.

About the Lupine:
Six species of lupine grow In Israel. Its seeds can be eaten after several boiling cycles to extract the poison from them. To this day, lupine seeds are sold in the Arab markets.

The lupine powdering process is very unique. Further reading on the website.
Note that the lupine is a protected flower, and picking is prohibited!

Getting here:
Drive south on road #38 and turn left (east) at the Elah junction onto road #375. After 2.5 kilometers, turn right on a dirt road where you can park your car. Google Maps / Waze.