To the Nes-Ziona sandstone ridges - to the Dark-purple Iris

The Nes-Ziona the sandstone ridges, a quiet and cozy corner that is suitable for two-three hours trip, are now blooming with magical grace.
Dozens of magical Iris flowers, accompanied by the White Broom bushes that provide a white, romantic "bridal" background.
In these soft hills which are about 50 meters above sea level, about 300 different species of plants are growing (10 of which are considered rare).
After years of conflicts between local volunteers together with the Society for the Protection of Nature against the real-estate sharks, the place has been recognized as a national park. (But has not been granted with formal status yet).
In the past, the area was "plowed" by jeeps that damaged the limestone. Today, because of awareness and cooperation with the municipality of Ness Ziona, the area was blocked, and it can only be accessed on foot and is also stroller friendly.
The municipality and the Nature Protection Society are holding a traditional march in February, during the blossoming of the Irises, attended by hundreds of people. 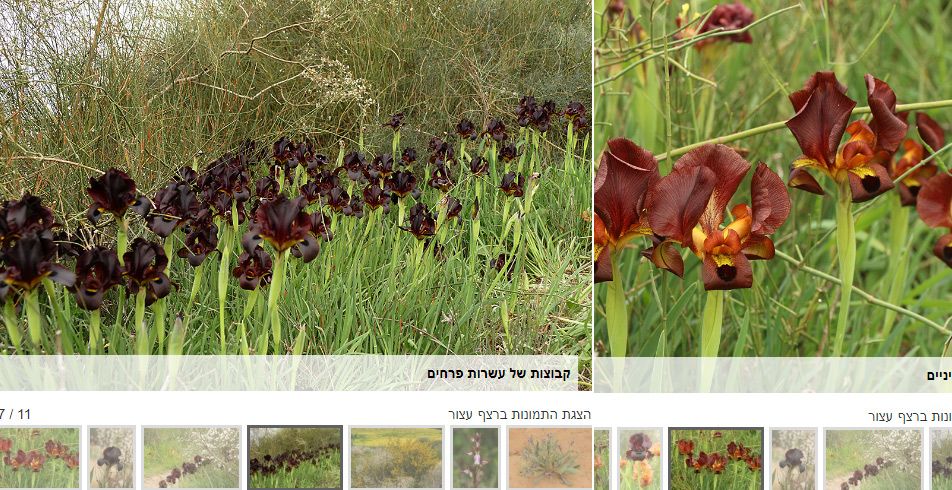 The Irises - The "Argaman Iris" (called by Israelis in Hebrew) appears in variety of shades, ranging from red-brown-dark-black to red-brown-light with yellowish hue.
They fit into the existing vegetation. They grow and flourish only in Hamra soil. So what is the sandstone, and how is it connected to Hamra? Limestone is a sand dune that has been petrified and is a unique phenomenon for the Israeli coastal area. Hamra is soil created from the erosion of limestone plus iron oxides. Sandstone ridges are a rare habitat where Mediterranean vegetation is combined with desert vegetation.
It is home to a few plants that grow only in limestone and other light soils. Such as This specific Iris and other rare species found only in central Israel.
The sandstone ridges and Hamra hills are also excelent view-points in the flat landscape of the coastal plain.
Today, only a few of these habitats have survived, and we must protect them. Notable examples of Sandstone hills are the Rishon LeZion hills, Ness Ziona, and the Sargent grove in Netanya.

During the Dark-purple Iris blossom season, it is recommended to start the trip from the entrance near the intersection between Derech Gvaot Hakurkar and Hayakinton Streets.
Google-Maps.
Just climb up the hill and ramble around, head to the West on the paved lines.
The White broom dominates the area, but in-between the bushes, many many red Irises dot the scenery and can be spotted from afar, although they are hiding. (See album here)

The the sandstone ridges is a unique habitat because the seeping water allows desert vegetation, such as the desert White broom and the Shaggy Sparrow-Wort flourish together with Mediterranean vegetation, creating a vast variety of species.
And now - lots of flowers.

About this beautifull and impressive iris
It is a big flower about 8 c"m in diameter iris, like a number of species in the Oncocyclus section is endemic to a certain area in the land of Israel, the sandstone ridges of the coastal plane from Atlith in the north to Ashkelon in the south. It appears in isolated populations composed of many dense clumps. It is protected by Israeli law.

Iris is The name of the rainbow Goddess in the Mythology.

Bach to our hike:
Iris is the most famous, but dozens of additional flowers are now blooming. Some are rare, the rarest of them is the  French Lavender (Named after the purple flag at its head)

The place is green and with a delicate scent. Around the hill, you can also find remains of an orchard, pine groves and Almond trees that also bloom in this season.

Stroll the trails and enjoy it. What else is now blooming?  Orchis saccata, Red Anemonies Marsia, Calicotome villosa bushes bloom in "shouting" Yellow, and amy more.

It is a festival of scents and colors.

How to get here?
The most convenient is to park at the commercial center at 6 Yakinton street. Please take care not to step on the flowers!